‘Oranjeplein’ at Café the Plaza is the epic center of the ‘Oranje’ FIFA World Cup celebration! 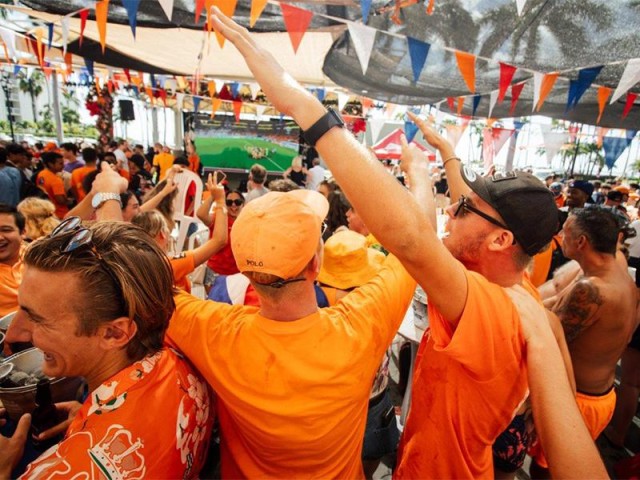 Even though the FIFA World Cup 2022 still must pick up momentum in the Netherlands, however, in Aruba there is no such thing. At the Oranjeplein right in front of Café the Plaza, an immense crowd cheered on the Dutch-Orange team. The atmosphere was electric, and you could feel the tension when the match between ‘Oranje’ and Senegal developed. But when the first Dutch goal was scored, the party was on.

The orange square in front of the Dutch bar-restaurant was completely decorated in orange, extra shade covers were placed, ample seats were available, convenient high tables everywhere and from the outside bars, very affordable Budweiser and Coronita were served. The ambiance was simply spectacular; many supporters were dressed in orange and sang along with the popular party beats of Bradley Fonseca, who played prior to the match, during the break and after.

“It was fantastic to see so many people enjoying the first match of the Dutch team at Café the Plaza. We anticipated a large crowd, but this even exceeded our expectations,” says Lieke Wijga, Director of Operations of Aruba Wine & Dine. “And Friday it’s going to be even bigger. It’s simply the place to be to watch ‘Oranje’ play in the World Cup. And it helped that the Dutch team won with 2-0,” she says with a smile.

The ‘Oranjeplein’ of Café the Plaza at Renaissance Marketplace is considered the official venue to experience the World Cup at its fullest! Entrance is free to all. There is a dino jump for kids, a penalty shootout with prizes to win, and an overly happy orange lion mascot that gets the party going.

The next matches of the Dutch team take place on the following dates:

The Qatar FIFA World Cup will go on until December 19th. During this period all FIFA fans will be able to enjoy different activities at the ‘Oranjeplein’, LIVE DJ’s, bucket deals, giveaways, multiple TV screens and of course a MEGA video wall, so the ‘Oranje’ team can be supported all the way!