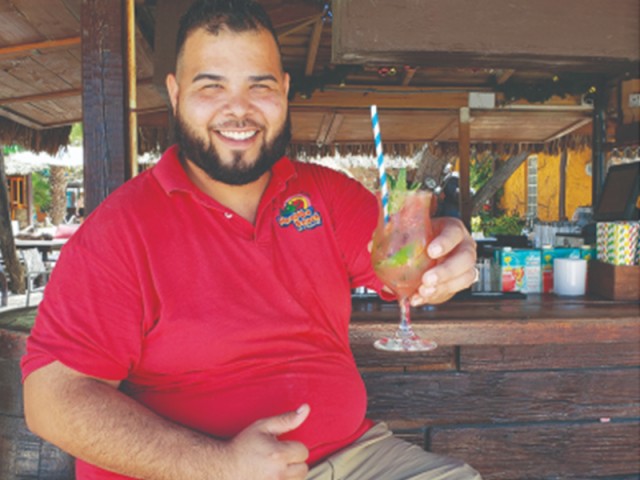 Move over, Tom Cruise! He’s not there yet, but MooMba’s Danny Kock is Aruba’s answer to Tom Cruise in Cocktail, the movie that inspired every bartender in the world. Airborne, Danny’s bottle twists and turns, catching the afternoon sunlight in the bar next to the popular beach-front restaurant. Danny’s smile does the rest: this Aruban guy is a right charmer, just like TC.

“A good bartender is someone who is real, whose personality is outgoing and who likes to make jokes, gets the cool vibes going so that guests want to stay at his bar and come back for more later’’, sums up what Danny stands for. He has been at MooMba for the past two and a half years, loving the holiday atmosphere, the music and the events. “New Year’s was wild – the party never stopped’’, he recalls. “And I also live the Soul Beach Festival, when hundreds of relaxed visitors enjoy themselves to the hilt, swimming, dancing, flirting and drinking to their hearts’ content.’’

Danny studied in Holland to become a chef and added `hospitality’ to his curriculum; but it was the bar, that made him decide to leave the kitchen. Personally, the family man and father of D’Jeandrick, D’Lyne, Alexander and Liam are great fans of the Watermelon Mojito and the Aruban Passion, a rather sweet yet sneaky cocktail made with raspberries, peach schnapps, pineapple, Passoa and MangoVice.

So, go to MooMba and ask Danny for his Tom Cruise Cocktail moves – don’t expect too much and you’ll be amazed. Go show them, Danny!