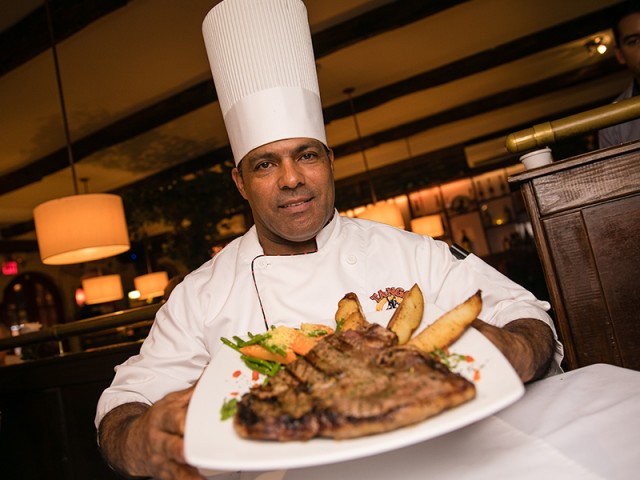 Chef Julian Moronta has manned the Argentinian-style parilla charcoal grill at Tango in the Palm Beach area since the restaurant opened in 1997.

Over the last 20 years, Moronta’s goal has remained the same: to consistently grill quality steaks, ribs, chicken and seafood for his appreciative clientele. “This is one of the most important things, to keep your quality, your flavour and your high standards,” he says. To maintain those standards, he works six days a week, which he’s done for more than 20 years and has no plans of slowing down.

What has changed is the restaurant décor; the sophisticated feel comes from black-and-white checkered floors, sleek wooden cabinets and wine racks. Steaks rest on an elevated counter at the back of the dining room – an area you could think of as Moronto’s throne – after coming off the grill directly behind him. A hand-crank next to the kitchen door raises the 10-foot grill within its well-ventilated brick-walled area, allowing Moronta to add more charcoal as needed from the oven to the left. He controls the temperature with a long metal skewer by moving the bricks of charcoal around underneath the grill.

Though originally from the Dominican Republic, Moronta has spent the last 20 years becoming an Argentinian grill master. By now, cooking each marinated boneless rib-eye, porterhouse and tenderloin to the perfect rare, medium-rare, medium-well or well-done is instinctual. And while some chefs might be nervous to be on display in front of customers while grilling 15 steaks at once, he loves it.

“People often tell me how they were watching and they were impressed that I was so busy but it looked like nothing,” he says. “They say to me, ‘Congratulations!’”

The impression evidently lasts, because they come back again and again. “When you create a good experience, customers feel at home. Working in the front of the grill, I get to talk to everybody. And the best feeling is when people tell me it’s the best meat they’ve ever had in their life. That kind of thing makes me feel like I’m doing good work.”

That best meal of their life often involves an Argentinian or Angus steak – Moronta uses both depending on what’s available. Cuts range from T-bones to sirloins to skirt steaks, with an eye-popping 24-oz porterhouse meant for two. “It’s really good because in a porterhouse you get the filet mignon and the strip loin,” says Moronta. “The most popular is the filet mignon, which is on the early bird menu and the regular menu.” It’s also part of the surf and turf menu item simple titled “Extravaganza,” a combination 6 oz filet mignon, 6 oz lobster tail and 6 oz of shrimp.

His favourite is the boneless rib-eye, he admits. “I like the fattier cuts because they’re going to give the flavour when you cook it. But any cut you take, I’m 100% sure you’re going to like it.”

That includes the churrasco tenderloin, which is the same as the filet mignon except slightly bigger and comes from the end of the tenderloin. To go with any steak, he suggests the chimichurri sauce with garlic and parsley, but there are also red wine, mushroom and pepper sauces.

Steaks occupy the right side of the grill, but the middle is for ribs, while the left is for chicken and then seafood. The Argentinian chicken is marinated in garlic, salt and pepper and, like the shrimp, can be added to the popular Caesar salad. Sunday nights are all-you-can-eat rib nights, where the ribs come slathered in barbecue sauce. And even vegetarians can enjoy a good char, with grilled Portobello mushrooms gratin stuffed with gouda and spinach. “We can also do vegetable skewers with mushrooms, carrot and broccoli on the grill,” he says.

In terms of appetizers, Moronta’s tastes also lean Argentinian. “My favourite is the skewered chorizo and morcilla sausage,” he says, which is cooked to order on the grill. The popular empañadas come from the kitchen, as do his second-favourite appetizer, the escargots.

After 20 years, Moronta still loves grilling. “Every day, it’s like when you start your engine. It starts with the same positive energy. I like what I do. I always have a smile for the guests. And when I ask how the food is and see their faces, I know I’m doing good.”